Every 4 years advertisers get the opportunity to showcase their glory in not one but two (Foot) / (Fút) ball events in one given year. But now that society has picked up its pace, how much of that content can be reused and how much of it is an opportunity to redeem themselves? Let’s take a look at some of the top advertisers in both events and see if that ROI paid off. 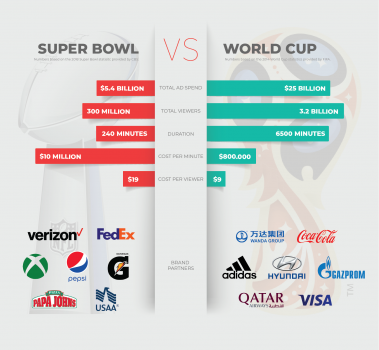 How many people actually watch?

Living in the United States, you know that each year, a marketing gold mine called the Super Bowl comes along. This game is one of the most significant events in the United States as almost everyone gathers together to watch, not only the biggest game in football but also the highly anticipated “Super Bowl commercials” from our favorite brands. Many of these people don’t even care about the game itself. They are just in it for the commercials. The previous host, CBS, stated an estimated 103.4 million people tuned in to watch the 2018 Super Bowl between the Patriots and the Eagles. The game lasts for four hours while a typical regular season game only lasts a little over three hours. But these four hours are hardly depicting what is happening on the field. Years ago, the Wall Street Journal was able to calculate the amount of time spent on each of these parts during a regular season NFL game. It was calculated that, during the entirety of the game, 75 minutes of it were spent watching players, coaches, and referees loiter on the field, 17 minutes were spent on replays, and only 11 minutes were spent watching action happening on the field. Within all of this, there was an average of 20 commercial breaks containing more than 100 ads. And during the Super Bowl, these numbers still hold true. The only addition is the time blocked out for the halftime show, which, typically lasts longer than the action on the field.

When done right, these ads last much longer than the Super Bowl does. Many of these ads call YouTube their home after the big game and the streaming service drums up millions of more views for years to come. The chart below dives into just a handful of the ads featured in the 2018 Super Bowl and how much views they have received since the end of the football postseason in February. 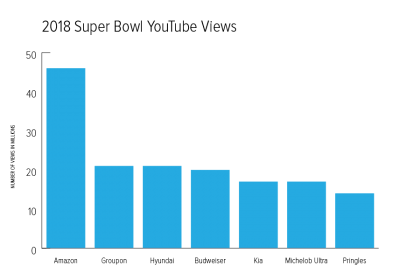 As for the rest of the world, nothing captures the attention of people like the FIFA World Cup does. Every four years, a worldwide fútball (soccer) tournament is held which features 32 national teams competing to be the best in the world. This month-long event is the most significant sports competition in the entire world. According to Fifa’s official numbers, the final game of the bracket generates over one billion viewers and the total in-home audience reach (1+ minute) even gets up to three billion viewers. With Fútball being the most played sport in the world, it is no question that almost every single nation is giving it their all to win the title.

These World Cup ads, much like the Super Bowl ads, keep gathering clicks after the big event. Similar to the chart above, the chart below measures the success of these ads in the digital space. One thing to note, however, is that the 2018 World Cup ended less than a week ago. So many of these numbers are over the course of three weeks, max. 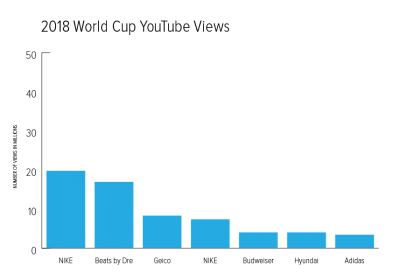 When it comes to fútball (soccer), The game is played over two 45 minute halves that never stop counting; even for a commercial break. For marketers, there is a major shift in your ad placements. In the Super Bowl, there is a commercial break every five minutes. With professional Fútball games, the clock never stops and the game never goes to commercial break until they reach halftime. But don’t let that fool you like Neymar Jr tries to fool the referees.  With 32 teams, 64 total matches played, and assuming that 3.2 billion people watch one entire game, that will garner over 700 billion minutes of attention. To help demonstrate this difference, let’s look at the recent games in this year’s World Cup. During the “round of 16” match between England and Columbia, there was a recorded number of over 24 million people–in the UK alone–to watch England make their last penalty kick to win the game. And that was just the first round of the knockout stage.

The massive amount of ad space is no stranger to those in the United States. All of the major league sports games are designed to allow as much ad time as possible. The Super Bowl is no different. The only difference is that companies have to fight each other for the best available ad space during the game. So for one of those companies that get the space they need, they still need to shell out a significant amount of money. A thirty-second ad space during the Super Bowl ran between $4.5 and $5 million. There is a lot more that goes into the cost of these commercials besides the cost of the ad space. All of these detailed costs can be seen in our previous blog post covering the Super Bowl commercial cost and expectations.

But how does that stack up to a sporting event like the World Cup?

With the 2018 World Cup still going on, official numbers have yet to be released. So we need to go back to the previous World Cup. In 2014, Brazil hosted the last men’s World Cup. Eight major marketers such as Coca-Cola, Johnson & Johnson, Hyundai, and Nestle sponsored the sole TV network that broadcast all of the games throughout the month. The cost of all of their ad space totaled $600 million. At roughly $75 million per sponsor, that is equivalent to 15 thirty-second Super Bowl commercials. According to the marketing director at Globo, Anco Saraiva, $75 million included 451 thirty-second TV commercials, hundreds of quick mentions by commentators, and a minimum of 1,120 video insertions. With how much TV time each of these sponsors gets for their money, that is comparable to one Super Bowl a day, for an entire month.

Being how expensive a thirty-second commercial space is during the Super Bowl, the only companies that can honestly afford it are the massive titans of companies. Companies like Coca-Cola, Tide, Amazon, and Budweiser purchase millions of dollars worth of commercial space at each Super Bowl. But they aren’t companies that need the exposure. Almost any given person knows all about these major companies. Instead of raising awareness of these companies, they are merely creating a story that gets millions of people talking about them and their fantastic commercial. “You’re buying access into a conversation, you’re buying access to be a part of a memorable experience, you’re triggering emotion…it’s a long tail strategy.” Explained Amy Avery, Chief intelligence officer of Droga5 Agency.

If we go by what Avery claims to be the secret to success, it should be no surprise that Super Bowl commercials like the Budweiser Clydesdales commercials, Amazon’s Alexa losing her voice, or Tide’s unexpected Tide ads, succeeded beyond expectations. They were able to get people talking about them for weeks after the game was over. The attention that came from it rocketed each of the respective commercials/company to the most trending list on Twitter and other social media platforms. They executed their strategies to perfection.

In regards to the World Cup, it’s a different game that these marketers have to play in order to have the incredible success that they have during the Super Bowl. And although the strategies for the World Cup are very similar, they have to execute it from a different angle. The humorous and heartwarming approaches still exist in this atmosphere, but they need to be able to speak to several different nations around the world. And luckily for them, they have nearly four years to prepare their ads for the next World Cup. A major sponsor, Pepsi, is perhaps one of the best examples from this year’s World Cup as their commercial does not contain a message or call to action that is specific to a single audience. Instead, they gathered several famous fútball players from around the world in an effort to grab the attention/interest of anyone watching. The commercial is brilliant in its simplicity. Each of e famous players is running through a town kicking soccer balls and drinking Pepsi and, without even needing to say a word, the commercial relays its message of playing fútball, and drinking Pepsi, is a universal activity we can all do together.

In comparison to the 2014 World Cup, we have had a lack of purely multicultural commercials this year. Companies like Pepsi are still doing their best to create these amazing commercials, but there was a recent addition to this year’s World Cup that changed the way companies think about their advertisements during the event. The 2018 World Cup is the first time that they are enabling companies to create commercials for a specific location. So for example, a company based out of Cincinnati is able to submit a commercial to air during the World Cup that will only be broadcast to viewers in the Cincinnati area. This allows many more small companies to get involved in the biggest marketing event throughout the world. This style has been around in many other forms of television events, but it’s the first time the FIFA World Cup has opened its doors to it. Will it create a steadier stream of revenue for the hosting networks? Or will it cause viewers to lose interest, as they are not seeing new and innovative commercials?

Discover the Solution that’s right for you. We are committed to maximizing the return on your marketing investment.